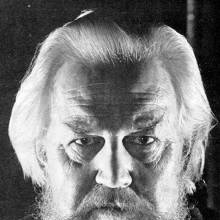 Robertson Davies was born on August 28, 1913, in the small village of Thamesville, Ontario. He was educated at Upper Canada College, Queen's University, and earned a degree in literature from Oxford. After a few years in theatrical life, he shifted into journalism, as the literary editor of Saturday Night magazine, and later the editor of the Peterborough Examiner. During this period, he began to write plays, and then novels, starting with Tempest-Tost in 1951. He wrote 10 other novels, grouped into trilogies, as well as many plays. In 1961 Davies was appointed Master of Massey College at the University of Toronto, the post where he remained until his retirement. Robertson Davies died on December 2, 1995, at the age of 82.

Those are the very bare and incomplete facts. Man of Myth, Judith Skelton Grant's biography of Davies, is a definitive source for more information, and will provide many insights; the biography draws significant parallels between incidents in Davies's life and in his fiction.