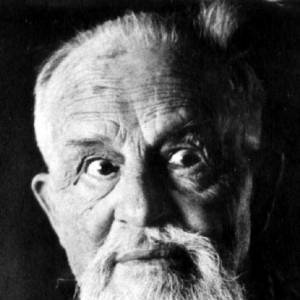 American author, who wrote over 70 detective novels, 46 of them featuring eccentric, chubby, beer drinking gourmet sleuth Nero Wolfe, whose wisecracking aide and companion in crime solving was Archie Goodwin. Stout started his literary career as a writer for the pulps, publishing romance, adventure, some borderline detective stories, but after 1938 all his fiction was in the mystery field.

“His face, chronically red, deepened a shade. His broad shoulders stiffened, and the creases spreding from the corners of his gray-blue eyes showed more as the eyelids tightened. Then, deciding I was playing for a burt, he controlled it. “Do you know,” he asked, “whose opinion of you I would like to have? Darwin's. Where were you while evolution was going on?”

Inspector Crames of Goodwin in Murder by the Book, 1951

Rex Stout war born in Noblesville, Indiana, as the son of John Wallace Stout and Lucetta Elizabeth Todhunter, who were Quakers. He was educated at Topeka High School, Kansas and at University of Kansas, Lawrence. From 1906 to 1908 he served in the United States Navy as a Yeoman on President Theodore Roosevelt’s yacht. He worked as an office boy, store clerk, bookkeeper, and hotel manager (1916-1927). Stout invented the banking system for school children that was installed in 400 cities throughout the USA. In 1916 he married Fay Kennedy of Topeka, Kansas. They separated in 1933 and Stout married in 1933 Pola Hoffman of Vienna.