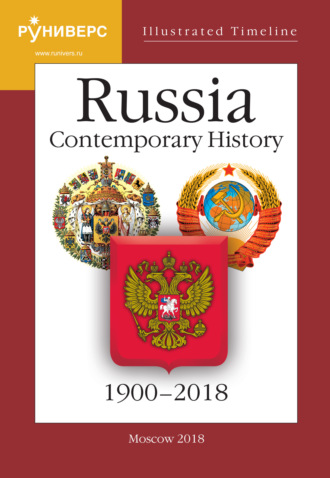 The Illustrated Timeline is a new illustrated format for presenting credible historical events and processes chronologically. This publication shows Russia’s history in chronological order over the course of more than eleven centuries, from the establishment of statehood to the modern day. The visual format shows how developments from Russian history correspond with the histories of other European countries. Leading Russian historians participated in the academic editing of the work.

The third installment of thetimeline, “Contemporary Russian History in the 20th and 21st Centuries,” covers the history of the Russian Empire, Soviet Russia, the USSR, and the Russian Federation from 1900 to 2018. It is divided into periods based on the ruling heads of state.

The main “timeline” presents the events in chronological order, supplemented by illustrations. Key processes are shown as colored bands and boxes with dates and annotations. At the top of the page, a separate “timeline” shows key historical events of the 20th and 21st centuries outside Russia, as well as major international developments involving Russia.