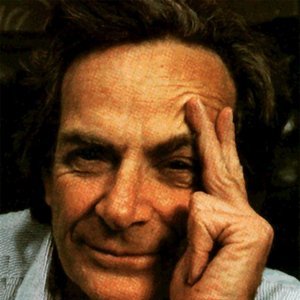 Richard Phillips Feynman (May 11, 1918–February 15, 1988) (surname pronounced FINE-man; /'fainmən/ in IPA) was one of the most influential American physicists of the 20th century, expanding greatly the theory of quantum electrodynamics, quark theory, and the physics of the superfluidity of supercooled liquid helium. «He reconstructed almost the whole of quantum mechanics and electrodynamics in his own way, deriving a way to analyze atomic interactions through simple diagrams (now known as Feynman diagrams), a method that is still used widely.»

He helped in the development of the atomic bomb and was later a member of the panel which investigated the Space Shuttle Challenger disaster. For his work on quantum electrodynamics, Feynman was one of the recipients of the Nobel Prize in Physics for 1965, along with Julian Schwinger and Shin-Ichiro Tomonaga. Feynman wrote only 37 research papers in his career (a remarkably small number for such a prolific researcher), but many consider the two discoveries he made at Caltech, superfluidity and the prediction of quarks, also worthy of the Nobel Prize. Apart from pure physics, Dr. Feynman is also credited with the revolutionary concept and early exploration of quantum computing, and first publicly envisioning nanotechnology, i.e. the ability to mass produce atomic-scale machines.

Feynman was a keen and influential popularizer of physics in both his books and lectures, notably a seminal 1959 talk on top-down nanotechnology called There's Plenty of Room at the Bottom and his transcribed lectures, The Feynman Lectures on Physics, a 3-volume set which has become a classic text. Known for his insatiable curiosity, gentle wit, brilliant mind and playful temperament, he is also famous for his many adventures, detailed in the books Surely You're Joking, Mr. Feynman!, What Do You Care What Other People Think? and Tuva or Bust!. As well as being an inspiring lecturer, bongo player, notorious practical joker, and decipherer of Mayan hieroglyphics, Richard Feynman was, in many respects, an eccentric and a free spirit. He was an entrepreneur in the sense that, like Leonardo da Vinci before him, he pursued many independent paths, breaking new ground as he went.