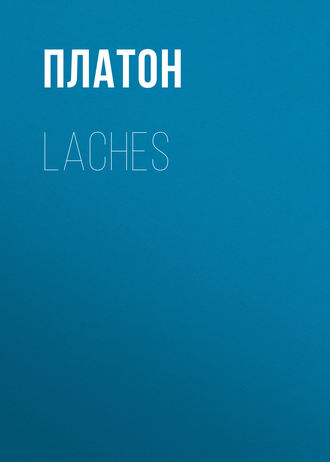 Lysimachus, the son of Aristides the Just, and Melesias, the son of the elder Thucydides, two aged men who live together, are desirous of educating their sons in the best manner. Their own education, as often happens with the sons of great men, has been neglected; and they are resolved that their children shall have more care taken of them, than they received themselves at the hands of their fathers.

At their request, Nicias and Laches have accompanied them to see a man named Stesilaus fighting in heavy armour. The two fathers ask the two generals what they think of this exhibition, and whether they would advise that their sons should acquire the accomplishment. Nicias and Laches are quite willing to give their opinion; but they suggest that Socrates should be invited to take part in the consultation. He is a stranger to Lysimachus, but is afterwards recognised as the son of his old friend Sophroniscus, with whom he never had a difference to the hour of his death. Socrates is also known to Nicias, to whom he had introduced the excellent Damon, musician and sophist, as a tutor for his son, and to Laches, who had witnessed his heroic behaviour at the battle of Delium (compare Symp.).

Socrates, as he is younger than either Nicias or Laches, prefers to wait until they have delivered their opinions, which they give in a characteristic manner. Nicias, the tactician, is very much in favour of the new art, which he describes as the gymnastics of war – useful when the ranks are formed, and still more useful when they are broken; creating a general interest in military studies, and greatly adding to the appearance of the soldier in the field. Laches, the blunt warrior, is of opinion that such an art is not knowledge, and cannot be of any value, because the Lacedaemonians, those great masters of arms, neglect it. His own experience in actual service has taught him that these pretenders are useless and ridiculous. This man Stesilaus has been seen by him on board ship making a very sorry exhibition of himself. The possession of the art will make the coward rash, and subject the courageous, if he chance to make a slip, to invidious remarks. And now let Socrates be taken into counsel. As they differ he must decide.

Socrates would rather not decide the question by a plurality of votes: in such a serious matter as the education of a friend's children, he would consult the one skilled person who has had masters, and has works to show as evidences of his skill. This is not himself; for he has never been able to pay the sophists for instructing him, and has never had the wit to do or discover anything. But Nicias and Laches are older and richer than he is: they have had teachers, and perhaps have made discoveries; and he would have trusted them entirely, if they had not been diametrically opposed.

Lysimachus here proposes to resign the argument into the hands of the younger part of the company, as he is old, and has a bad memory. He earnestly requests Socrates to remain; – in this showing, as Nicias says, how little he knows the man, who will certainly not go away until he has cross-examined the company about their past lives. Nicias has often submitted to this process; and Laches is quite willing to learn from Socrates, because his actions, in the true Dorian mode, correspond to his words.

Socrates proceeds: We might ask who are our teachers? But a better and more thorough way of examining the question will be to ask, 'What is Virtue?' – or rather, to restrict the enquiry to that part of virtue which is concerned with the use of weapons – 'What is Courage?' Laches thinks that he knows this: (1) 'He is courageous who remains at his post.' But some nations fight flying, after the manner of Aeneas in Homer; or as the heavy-armed Spartans also did at the battle of Plataea. (2) Socrates wants a more general definition, not only of military courage, but of courage of all sorts, tried both amid pleasures and pains. Laches replies that this universal courage is endurance. But courage is a good thing, and mere endurance may be hurtful and injurious. Therefore (3) the element of intelligence must be added. But then again unintelligent endurance may often be more courageous than the intelligent, the bad than the good. How is this contradiction to be solved? Socrates and Laches are not set 'to the Dorian mode' of words and actions; for their words are all confusion, although their actions are courageous. Still they must 'endure' in an argument about endurance. Laches is very willing, and is quite sure that he knows what courage is, if he could only tell.

Nicias is now appealed to; and in reply he offers a definition which he has heard from Socrates himself, to the effect that (1) 'Courage is intelligence.' Laches derides this; and Socrates enquires, 'What sort of intelligence?' to which Nicias replies, 'Intelligence of things terrible.' 'But every man knows the things to be dreaded in his own art.' 'No they do not. They may predict results, but cannot tell whether they are really terrible; only the courageous man can tell that.' Laches draws the inference that the courageous man is either a soothsayer or a god.

Again, (2) in Nicias' way of speaking, the term 'courageous' must be denied to animals or children, because they do not know the danger. Against this inversion of the ordinary use of language Laches reclaims, but is in some degree mollified by a compliment to his own courage. Still, he does not like to see an Athenian statesman and general descending to sophistries of this sort. Socrates resumes the argument. Courage has been defined to be intelligence or knowledge of the terrible; and courage is not all virtue, but only one of the virtues. The terrible is in the future, and therefore the knowledge of the terrible is a knowledge of the future. But there can be no knowledge of future good or evil separated from a knowledge of the good and evil of the past or present; that is to say, of all good and evil. Courage, therefore, is the knowledge of good and evil generally. But he who has the knowledge of good and evil generally, must not only have courage, but also temperance, justice, and every other virtue. Thus, a single virtue would be the same as all virtues (compare Protagoras). And after all the two generals, and Socrates, the hero of Delium, are still in ignorance of the nature of courage. They must go to school again, boys, old men and all.

Some points of resemblance, and some points of difference, appear in the Laches when compared with the Charmides and Lysis. There is less of poetical and simple beauty, and more of dramatic interest and power. They are richer in the externals of the scene; the Laches has more play and development of character. In the Lysis and Charmides the youths are the central figures, and frequent allusions are made to the place of meeting, which is a palaestra. Here the place of meeting, which is also a palaestra, is quite forgotten, and the boys play a subordinate part. The seance is of old and elder men, of whom Socrates is the youngest.

First is the aged Lysimachus, who may be compared with Cephalus in the Republic, and, like him, withdraws from the argument. Melesias, who is only his shadow, also subsides into silence. Both of them, by their own confession, have been ill-educated, as is further shown by the circumstance that Lysimachus, the friend of Sophroniscus, has never heard of the fame of Socrates, his son; they belong to different circles. In the Meno their want of education in all but the arts of riding and wrestling is adduced as a proof that virtue cannot be taught. The recognition of Socrates by Lysimachus is extremely graceful; and his military exploits naturally connect him with the two generals, of whom one has witnessed them. The characters of Nicias and Laches are indicated by their opinions on the exhibition of the man fighting in heavy armour. The more enlightened Nicias is quite ready to accept the new art, which Laches treats with ridicule, seeming to think that this, or any other military question, may be settled by asking, 'What do the Lacedaemonians say?' The one is the thoughtful general, willing to avail himself of any discovery in the art of war (Aristoph. Aves); the other is the practical man, who relies on his own experience, and is the enemy of innovation; he can act but cannot speak, and is apt to lose his temper. It is to be noted that one of them is supposed to be a hearer of Socrates; the other is only acquainted with his actions. Laches is the admirer of the Dorian mode; and into his mouth the remark is put that there are some persons who, having never been taught, are better than those who have. Like a novice in the art of disputation, he is delighted with the hits of Socrates; and is disposed to be angry with the refinements of Nicias.

In the discussion of the main thesis of the Dialogue – 'What is Courage?' the antagonism of the two characters is still more clearly brought out; and in this, as in the preliminary question, the truth is parted between them. Gradually, and not without difficulty, Laches is made to pass on from the more popular to the more philosophical; it has never occurred to him that there was any other courage than that of the soldier; and only by an effort of the mind can he frame a general notion at all. No sooner has this general notion been formed than it evanesces before the dialectic of Socrates; and Nicias appears from the other side with the Socratic doctrine, that courage is knowledge. This is explained to mean knowledge of things terrible in the future. But Socrates denies that the knowledge of the future is separable from that of the past and present; in other words, true knowledge is not that of the soothsayer but of the philosopher. And all knowledge will thus be equivalent to all virtue – a position which elsewhere Socrates is not unwilling to admit, but which will not assist us in distinguishing the nature of courage. In this part of the Dialogue the contrast between the mode of cross-examination which is practised by Laches and by Socrates, and also the manner in which the definition of Laches is made to approximate to that of Nicias, are worthy of attention.

Thus, with some intimation of the connexion and unity of virtue and knowledge, we arrive at no distinct result. The two aspects of courage are never harmonized. The knowledge which in the Protagoras is explained as the faculty of estimating pleasures and pains is here lost in an unmeaning and transcendental conception. Yet several true intimations of the nature of courage are allowed to appear: (1) That courage is moral as well as physical: (2) That true courage is inseparable from knowledge, and yet (3) is based on a natural instinct. Laches exhibits one aspect of courage; Nicias the other. The perfect image and harmony of both is only realized in Socrates himself.