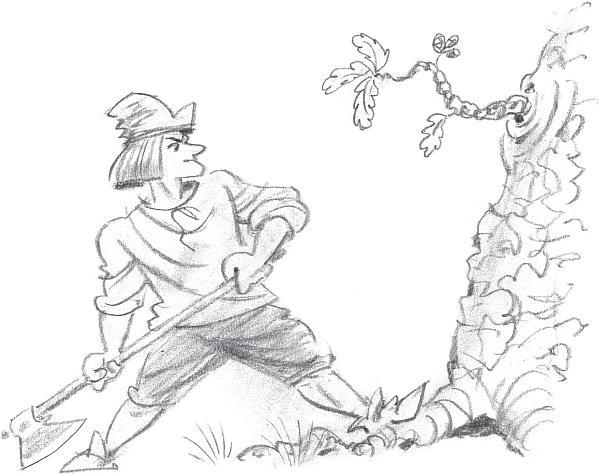 Once upon a time there lived a young farmer. He worked very hard, and yet he was quite poor. One day he ploughed his field. Suddenly a strange woman appeared before him. And this is what she said to him:

“Why are you working so hard, and all for nothing?[2] Listen to me. Go straight on for two days until you come to a great oak. This oak stands by itself[3] and is higher than all the other trees. Fell it, and your fortune is made.[4]” And she disappeared as suddenly as she appeared.

The farmer took his axe and started on his way. He went straight on for two days. At the end of the two days he came to a place where he saw a great oak which stood by itself and was higher than the other trees.

“Now I see that the woman told me the truth,” said the farmer to himself. “I must do what she said.” And he began to fell the tree at once.

When the tree came down, a bird’s nest fell on the ground. Two little eggs in the nest were broken. From one of them came a gold ring, from the other a wonderful bird. The bird grew and grew until it was very large. It became so large that the farmer was frightened. But the wonderful bird spoke to him in a very kind voice.

“You have set me free,[5]” said the bird, “and I want to thank you for it. I shall give you the ring that was in the other egg. It isn’t an ordinary ring. It is a wishing ring. If you turn it on your finger, and say to yourself a wish, your wish will come true.[6] But you can only have one wish. After that the wishing ring will become an ordinary ring. So you must think carefully before you say your wish.”

And with these words the bird flew away. The farmer put the ring on his finger and started on the way home. In the evening he came to a town and went to a goldsmith who had many gold rings in his shop. The farmer showed him the ring and asked what it was worth.

“Next to nothing,[7]” answered the goldsmith.

The farmer laughed aloud and said, “You don’t understand anything. It is a wishing ring. It is worth more than all the rings in your shop put together.”

That goldsmith became silent; he was greedy enough. Though he was very rich, he always wanted to have more money. So he asked the farmer to stay at his house for the night.

“It will bring me good fortune,[8]” he said, “if a man with such a wonderful ring spends the night here.”

The goldsmith gave the farmer some bottles of wine to drink and talked to him like a friend. But he was a false friend, indeed! At night, when the farmer was fast asleep, he took the ring from his finger, and put another one in its place, which looked just like the wishing ring.

In the morning the goldsmith could hardly wait[9] until his guest left his house. As soon as the farmer went away, he hurried to his shop, closed the shutters, locked the door, turned the ring on his finger and said, “I wish to have a hundred thousand sovereigns.[10]”

As soon as he said these words the sovereigns began to come raining down.[11] The sovereigns fell on his head, his shoulders, his arms; they fell all over his body. He tried to get to the door, but the rain of gold made it impossible. Soon the gold covered all his body. He couldn’t move, and it still rained. At last the floor could bear the weight no longer, and the goldsmith and the gold fell into the cellar.

When the neighbours heard the terrible noise, they came running and broke open the door. But they were too late. The greedy goldsmith was already dead.

So they sighed and said, “What a misfortune it is to have so much money!” And they all put in their pockets as much money as they could carry and went away.

Meanwhile the farmer came home and showed the ring to his wife.

“We are lucky people,” he said, “our fortune is made. But we must be careful. We must choose the right wish.”

His wife was delighted.

“Let’s wish for some more land,” she said. “There is a nice bit of land between two of our fields. What do you say to that? I think it’s the best wish we can have.”

But the farmer answered, “I am sure we can wish for something better than that. If we work hard for a year, we shall perhaps be able to buy this bit of land.”

So they worked very hard for a year and as the harvest was good, they had enough money to buy that bit of land easily.

“You see,” said the farmer to his wife with a smile, “we have that bit of land now, and we still have our wish.”

“Then perhaps we shall wish for a cow and a horse?” offered his wife. “Our life will be easier then. We shall not have to work so much.”

“My good wife,” said the farmer, “let’s not waste our wish, just for nothing.[12] I think we shall get a horse and a cow even without it.”

So they again worked day and night for a year and the harvest was good again. At the end of the second year they had enough money to buy a horse and a cow. The farmer was very pleased and said, “Again we have got what we wanted, and we still have our wish. What lucky people we are!”

But his wife did not agree with him. She was very angry with her husband.

“You cant’ say that!” she cried. “I really can’t understand you. I wonder at you. You always complained that we had to work so much. You always wanted to have many nice and useful things. And now when you can have anything you desire, you work from morning till night and make me work as much.[13] We work and work and work. All work and no play make Jack a dull boy.[14] And the best years of our lives go by. You might be a great man – a king I dare say! You might have your cellars full of silver and gold. And you are nothing, just because you cannot decide what to wish and cannot use your wishing ring.”

“Stop worrying about this wish,” the farmer answered firmly. “We are both still young, and life is long. Remember there is only one wish in the ring. It is very easy to make a mistake. And if we make a mistake, we shall be so unhappy. We shall never forgive ourselves. No, no! We must keep our wishing ring. It has already brought us good fortune. We must not use it yet. Be reasonable, my dear. Cheer up and try to choose the best wish.”

What the farmer said was true. The ring really brought them good fortune. But they both still worked hard all day. And in the evening the farmer usually sat on the steps, smoked his pipe and talked with his neighbours.

The years went by, their children grew up, but the farmer still kept his wish. Sometimes his wife spoke to him about it, but he always answered,

“No, no, my dear. We have still a lot of time. We must not use our wishing ring yet.”

At last she saw that she couldn’t make him use the ring and gave up speaking about it.[15] Though the farmer often looked at his ring and even turned it on his finger, he never said a wish. Thirty, forty years went by. The farmer and his wife grew old, their hair was white as snow.

And so they lived happily on till one day, when they both died together, at the same time. Their children and grand-children stood around them and cried. The youngest son wanted to take the ring from the father’s finger as a remembrance; but the eldest son said,