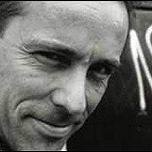 Jasper Fforde worked in the film industry for 13 years where his varied career included the role of "focus puller" on films such as Goldeneye, The Mask of Zorro and Entrapment. He had been writing purely for his own amusement for several years, but always harboured a dream of trading in his film career to become a full time writer.

After receiving 76 rejection letters from publishers, Jasper’s first novel The Eyre Affair was taken on by Hodder & Stoughton and published in July 2001. Set in 1985 in a world that is similar to our own, but with a few crucial – and bizarre – differences (Wales is a socialist republic, the Crimean War is still ongoing and the most popular pets are home-cloned dodos), The Eyre Affair introduces a remarkable heroine, a literary detective named 'Thursday Next'. Thursday’s job includes spotting forgeries of Shakespeare’s lost plays, mending holes in narrative plotlines, and rescuing characters who have been kidnapped from literary masterpieces.

The publication of The Eyre Affair started a ‘book phenomenon’, in which readers were catapulted in and out of truth and imagination. The novel garnered dozens of effusive reviews, and received high praise from the press, from booksellers and readers throughout the UK. The number of reprints have now reached double figures, and first editions are traded on ebay for hundreds of pounds. In the US The Eyre Affair was also an instant hit, entering the New York Times Bestseller List in its first week of publication.

In addition to achieving impressive sales figures in the US, Jasper was also recently named in Entertainment Weekly (the bible for all media news in the US) as one of the members of its 'It' list for 2002 – alongside the likes of Philip Pullman, Anna Patchett, Stephen Carter, Ian McEwan and Eminem...

Jasper’s second novel Lost in a Good Book was published in the UK in July 2002 and it has built on the amazing success of The Eyre Affair. The Sunday Times described him as “this year’s grown up JK Rowling” and both books just keep on selling – their combined sales have now topped 140,000 copies. Jasper’s eagerly awaited third novel in the Thursday Next series is called The Well of Lost Plots and is to be published in the UK in July 2003.

Jasper lives and writes in Wales and has a passion for aviation.