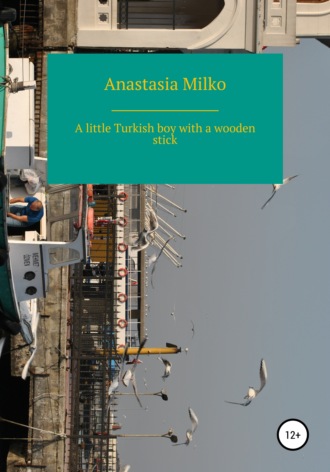 Anastasia Milko
A little Turkish boy with a wooden stick

A man who loves stories and collects them as other collect postcards, can’t but share them, otherwise they will haunt him and might as well start to rule his reality through feelings and deeds. Thus, the only way to let the old pictures go is to give them life. That’s my plan for the rest of my life, even if no one shows the slightest interest in them, there must liberation.

A new story to tell

Imagine the scene: the oldest district in Fatith named Balat, one of the historically richest places in Istanbul, yet unfairly neglected by many tourists, especially now during coronavirus restrictions. Quietly walking along the curvy paving streets, where famous coffee shops are still closed, a girl is devouring the peaceful scenery with her sparkled eyes barely paying attention to her companion’s words. It’s still early in the morning. The naked sun is covering colorful wooden and stone houses, washing away the sleepiness of the neighborhood. The girl is escorted by a reputable guide who volunteered to show her the fading beauty of utterly amazing ancient skinny tall houses, and most importantly to tell her old forgotten stories behind shabby rusted gates with vines covering the broken locks and fancy Mediterranean style cottages of all the colors imaginable. It was her main objective to hear the precious story of little significance to many, yet not her. The stories of love and abandon, of greedy pashas and noble fishermen, of a little beauty in a tattered cloths noticed by both a kind and plain street shoe cleaner boy and a sinful and lustful merchant. The girl longed to become part of their lives and follow them toward heaven or hell, depending on their choices and intentions.

However, to her utter disappointment, the guide’s English was extremely poor and, feeling that the barrier will not allow her to penetrate into his bright and quick mind, she sighed theatrically and turned away, focusing instead on the decorations of the district, willing to listen to the stories that life itself was ready to confide in a very keen for secrets foreigner. Anyway, these stories couldn’t have been worse than her guide’s ones.

The story she learned that day faded over time, and the memories of the boy started to intermingle with her own imaginative pictures, shall she not lose the thread of the plot, it was decided to let it flow. It didn’t seem right to keep the beautiful story in the dark to your own satisfaction, when someone might have been longing to hear about a brave and decisive boy with a little wooden stick their whole life.

The story begins late at night on the 22nd of May.

“Do you even listen to a word I say?” muttered baba Yussuf, addressing his older son Kerem.

“You have aroused envy and wounded some of our neighbors’ pride son, boasting of your new phone on the streets yesterday, using the shaitan expressions and insults!” the father tried to keep his voice firm but without confronting the young man, who looked rebellious and had fire in his indifferent eyes now, father continued his preaching. Indeed, his son was nothing like the boy he used to know just a few years ago. Mr. Yussuf had no idea what was it he had to do as a head of the family now, he prayed for both of his sons in the Mosque as well as at home, sometimes concentrating merely on Kerem. The lovely boy turned out a nightmare for everyone who knew him and cared for him. Even Allah seemed to be too busy to solve the matter. God knew that Yussuf did nothing wrong, never he was strict or touched the sons. His main objective in life was to raise good Muslim men, a blessing of his life.

“Firstly, father, don’t instruct me as if I were Can or your wife” the tone of Kerem’s bold speech stroke his father’s heart, yet he kept quiet to let the boy finish what he had in mind.

“Secondly, I have little concern, if any, for what our neighbors might think of me”

It was dark and still raining; the wind didn’t show the hint of ceasing and everyone was sleeping apart from Mr. Yussuf and his sixteen year old son, who just came home after only God knows what kind of secret business. Whatever had happened to Kerem, the truth was inescapable for Yussuf, his older son, his main merit of the life, was drunk or even high. It was difficult to reject the truth anymore. He dared to come home after dirty deeds, being drunk and absolutely disrespectful, not even planning to pretend being sorry.

“In this case, son, think at least about me and your mother, it is such a torture to go out literally feeling contempt and disapproving look of our friends. Even Can, whom you love more than us, I suppose, suffers from your behavior now”

Yussuf had hopes to shatter his sons defending walls with a sense of pity toward his own family, since public opinion had no effect on Kerem’s conscience anymore.